This Side of Home: Gentrification, Wokeness, and Hometown Literature 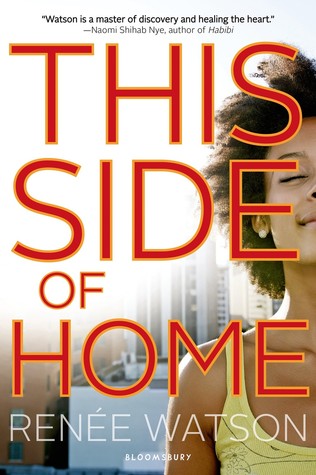 Reading a book set in your hometown is probably not that unusual if you live in New York, London, or even LA.  But fewer books are set in Portland, so I was excited to pick up This Side of Home, by  Renée Watson.  Even more enticing, Watson is a person of color, and her book addresses issues around gentrification in NE Portland.

My dad grew up in that neighborhood after WWII, when it was mostly working class white, although his high school was the most racially diverse in town at that time.  White flight started in the sixties and by the time I was visiting my grandparents in the seventies, they were one of the only white families left on the block.  Bars went up over windows and doors, although, my mom grumbled, that probably said more about the prejudices of the neighborhood's original homeowners than the habits of the newcomers.  When we sold my grandparents' house after they died, we were horrified by the clause on the original deed that stated it could not be sold to "Negros or Jews," glad that the law now invalidated it.  Besides the moral implications, it would have been hard to find a white buyer in 1980.

My dad's old high school became a magnet school for dance, a program that was hugely successful in the eighties, when I was in high school, although the "regular" part of the high school, for the neighborhood kids, started to struggle.

The nineties brought gangs to Portland in full force.  Jefferson High lost funding for their dance program, and quickly gained a reputation as the lowest scoring school in town.  The school was reconstituted (every single staff member fired, then a new staff hired) at least once.  Leaders with great visions for reform were hired, only to leave again a year or two later.

In this century, gentrification has spread across the east side.  The last time I visited the house my dad grew up in, on my way to a pre-wedding yoga class in the bride's friend's yard, every single house on the block had gardens in bloom and quaintly painted porches.  Portland's hipster reputation stems from these neighborhoods, with their street fairs, green fennel and maple ice cream, and kilt-wearing, bagpipe playing unicyclists in Darth Vader masks. (Not even kidding--google it.)  Whatever the opposite of white flight is, that's what's going on.  "I love this part of town because it's so diverse!" we exclaim, as if we don't notice that our black neighbors have been relocated by rising housing costs.

This is the neighborhood Nikki and Maya live in.  Richmond High is Jefferson High.  Jackson Avenue is Mississippi Avenue.  The chi-chi ice cream place with lines around the block is Salt & Straw.  And if it's a bit jarring to hear the girls refer to "Oregon Museum of Science and Industry" instead of OMSI or "Portland Community College" instead of PCC, well, that's the price you pay for living in a town that is off-the-beaten-path enough that we can't assume others know our acronyms.

Reading this book is getting me to think hard about the We Need Diverse Books movement, and my own commitment to reading more widely.  I can read about prejudice in other times and be outraged.  I can read about injustice in other parts of the world and be heart-broken and indignant.  I roll my eyes at white fragility and explain earnestly that racism = prejudice plus power, so reverse racism is a nonsensical concept.

But when I read about a complex, racially charged issue in a place I have strong connections too, all of a sudden I'm conflicted.  I'm all "Yes, but..." and "On the other hand..."

THIS.  This is we we NEED diverse books.  It's easy to be anti-racist and pro social justice when the issues don't affect you directly.  No DAPL!  Black Lives Matter!  Those are easy.  There is no benefit to me, nor am I personally implicated in putting in a pipeline or murdering children of color, so it's simple for me to pick the right side in those arguments.  But pointing out the downside of gentrification of the part of town with all the cool old houses?  That's stepping on my toes.

Which is waking me up.  "Woke" is a word that's been tossed around a lot lately, but I didn't fully realize how appropriate it is until I felt myself coming awake to an issue right here in my world.

Change is inevitable and not inherently evil. The neighborhood whose passing Maya mourns replaced the one my dad grew up in, which replaced another era's culture as well.  But who benefits, and who loses?  In every iteration, it seems that the white Portlanders benefit while the black Portlanders get screwed.  In the same way we kept pushing the native Americans onto crappier and crappier pieces of land, reneging on promises and treaties to satisfy our own lust for property, we do the same in the neighborhoods of our cities.  Sure, in our more "enlightened" era, black folks who make good money and assimilate into white culture are welcome to stick around the gentrified neighborhood--but why are poor whites more welcome than poor blacks?  Why are they expected to act like us but never the other way around?

Watson brings up all of this and more in just the first 1/3 of the book, all I've read so far.  By positioning twins Nikki and Maya on opposing sides of the debate, she keeps the issues complex and--sorry but it has to be said--less black and white, more shades of grey.  The more proudly African American Maya seems to be falling for the nice white boy whose family moves into the house that was gentrified out from under her best friend.  I wonder if Nikki, with her straight hair and fondness for fro-yo, is going to renege on their lifelong plan of attending a historically black college.

It's challenging and rewarding to read a book in which the setting is so familiar, but the point of view is so different.  I hope Watson continues to write and write and write about our city, which has always been home to a wider range of people than Henry, Ramona, and Beezus.