I've mentioned before that we like to borrow games from the library.  It's a great way to find and test new games without having to commit to buying them, especially since although we really like to play family games, almost any game will go from board to boring if you play it often enough.  There are a handful we've tried lately that have been great fun, and I thought I'd share them with you.  Maybe you have access to a game library too, or are looking for a new game for your family or a gift.  These are all games my family really enjoyed and recommend.  For the record, we are one creative tween, one teen who struggles with literacy, one adult who is a chess and bridge champion, and one adult who is more into playing the game while socializing than actually winning--so a pretty wide range of tastes.   Titles link to Amazon.

I had a version of this when I was a kid, but it was called Pigmania.  It's ridiculously simple and is 100% based on luck, yet we've found it surprisingly fun even over multiple playings.


There are two small rubber pigs.  You take turns "rolling" them like die.  You get points based on how they land.  One pig on its back?  Five points.  Both pigs standing up?  Ten points.  What ups the tension is that each player can choose to keep rolling, and adding points, as long as they choose--but if the pigs land on their opposite sides, you lose all your points from this turn.  (There's a cut-throat rule that if they land touching each other, the player loses ALL their points, but we've chosen to ignore that rule in favor of avoiding tears and tantrums.)  So silly.  So fun. (2-4 players, all ages) It looks like Chinese checkers and plays like sudoku.  There's a wooden board with nine sets of squares that each have nine indentations.  There are colored wooden balls in nine shades.  You take a card (105 cards, from simple to wildly difficult) and place a handful of balls into the locations shown.  Then you try to place all the other balls so no color is repeated in a row or a square.  The Winemaker and I play this cooperatively after the kids go to bed, or it works well for solo play.  I like it better than Sudoku because it's so concrete. (1-2 players, aged "I enjoy logic games" and up.) 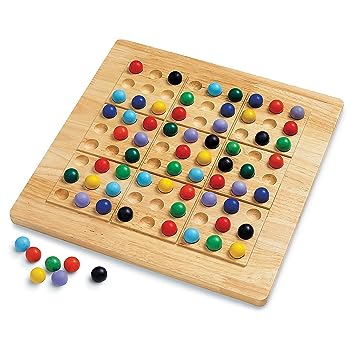 A card game with gorgeously illustrated cards, Vie involves setting out cards next to matching cards in order to claim both--but your opponent can then lay down another matching card and take it all away.  A set of royal cards belongs to each player and they can also alter the game, and you can add as many (or few) "special" cards into the mix as you want, to keep things interesting.  We played it non-stop for a month, turned it in for six months, then checked it out again. (2-4 players, ages 8 and up.)

Our newest find, Dixit is another game that involved gorgeously illustrated cards.  No two are alike.  When it's your turn, you choose one of your cards and give the other players a clue--a word, a phrase, a story title--something that your card represents.  They each choose a card from their hand that could also be represented by that clue.  The cards are shuffled and presented, then everyone (except the person whose turn it is) guesses which is the "real" card.  Points are given for guessing correctly and for getting someone to guess your "wrong" card.  The clue-creator only wins if some people guess right and some guess wrong.  In other words, your clue can be neither too obvious nor to obscure.  I didn't now how the kids would do with the amorphous nature of the directions, but they got right into it, throwing out "adventure," "prison," and "odd one out" as some of their clues.  This is a game that works the complete opposite brain muscles from ColorKu!   (3-6 players, ages 10 and up.)

Does your family or friend group enjoy board games and card games?  What are some of your favorites?  Any unusual ones we should know about?
Posted by Wendy at 4:59 PM