Most Dangerous is Most Fascinating and Most Timely

I really, really liked Steve Sheinkin's book Most Dangerous: Daniel Ellsberg and the Secret History of the Vietnam War.  I've been avoiding reading it for two years now, because it sounds so serious.  It's got a guy in a tie on the front, and it's about Vietnam.  How much fun can it be?

It's brilliant.  It's fascinating, horrifying, exciting, fast paced, evocative, and engaging.  Sure, it's also informative and thought-provoking, but it's not boring.  (Like if you say someone has a great personality, it doesn't mean they're NOT good-looking too.)

When Ellsberg gets the Pentagon Papers--government documents that lay bare the sordid history of the U.S.'s actions and policies in Vietnam--released in the New York Times, an injunction was laid on them to cease publication.  They took it to court, and the judge's decision reads in part:

"A cantankerous press, an obstinate press, an ubiquitous press must be suffered by those in authority in order to preserve the even greater values of freedom of expression and the right of the people to know." (pg. 236)


What?!?  The right of the people to a free press is more important than the irritation of people in power?!?

And then there's this one.  As the news came out and everyone debated whether Ellsberg's decision to leak top secret information was a heroic act or a treasonous one, he was asked by Walter Cronkite (look him up, young'uns!) what he thought the meaning of it all was.

"I think the lesson...is that the people of this country can't afford to let the president run the country by himself." (pg. 245)


I'm just going to let that sit there.


My only regret regarding this book is that my parents aren't still alive to quiz about their recollections of the events described.  My dad was a photographer at Oregon's largest daily newspaper, so I KNOW he would have had an opinion.  I also would like to ask them if their thoughts about the Pentagon Papers shifted over time.  In retrospect, it's hard to find fault with Ellsberg's actions, but I understand why it was so highly controversial at the time.

There is something hugely discouraging in reading about how the most powerful people in the land, regardless of party affiliation or even good intentions, make and hide terrible decisions.  But there's something hopeful about the idea that we the people, as individuals and groups, can still make a difference despite them. 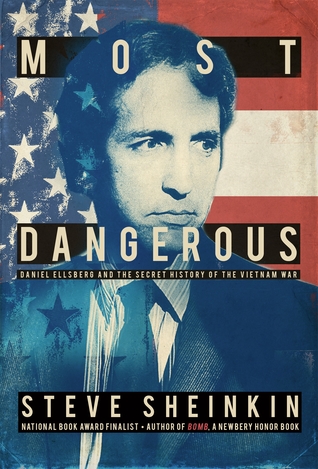